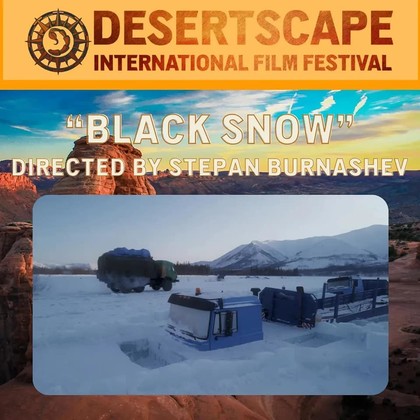 Gosha is a self-employed trucker, who delivers goods to remote northern parts of the Sakha Republic (Yakutia). He uses his competitive edge and his services are expensive. Moreover, he supplies fake low-quality vodka to his native community, thereby alcoholizing the locals.
After another trip, he exchanges vodka for meat and fish – the only currency the northerners are able to pay him. His greed lures him into driving back to the city without a partner-driver. During the journey, his truck breaks down. He is stuck in the middle of nowhere. Нe is the only living soul for hundreds of kilometers around.

The Desertscape International Film Festival invites and encourages filmmakers and screenwriters from all around the globe to submit their work--shorts, features, student films, etc. If you're proud of it, submit it! Furthermore, all genres are welcome.

Every film designated an “Official Selection” will be presented in a live theatrical setting to enthusiastic festival attendees over the course of 4 fun-filled days in one of the most beautiful cities in the U.S. And yes, awards will be handed out to the best of the best!