From The Planet Of The Humans 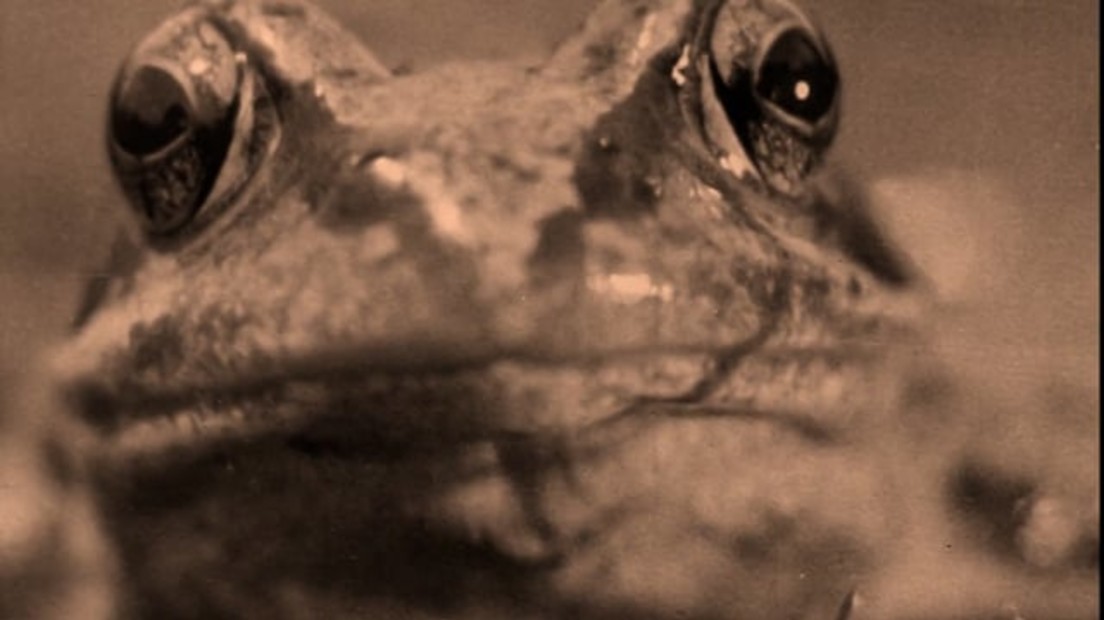 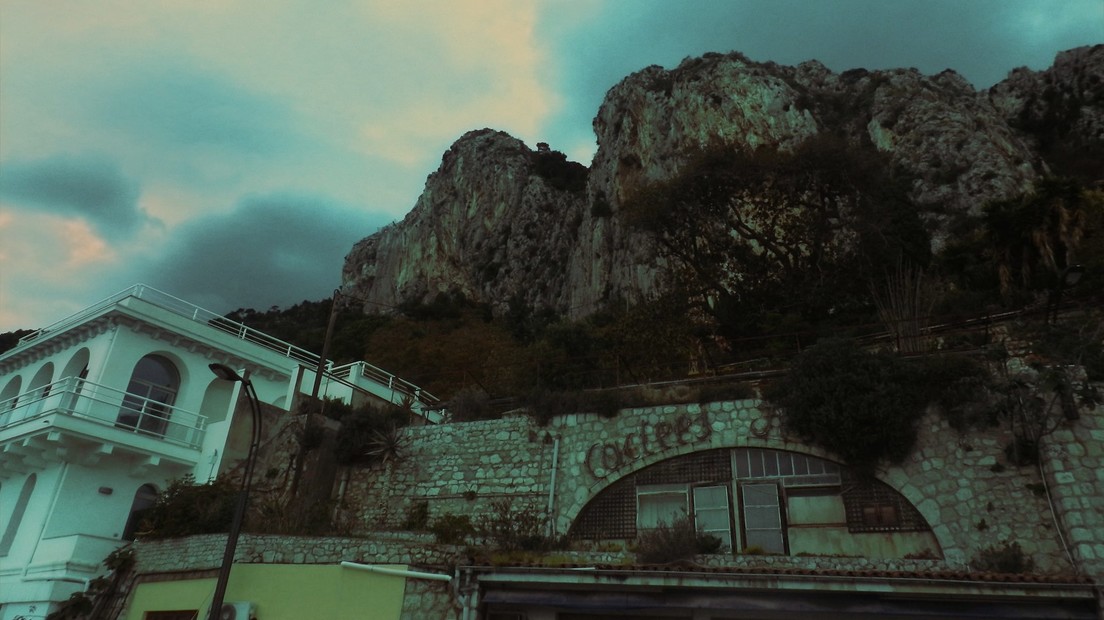 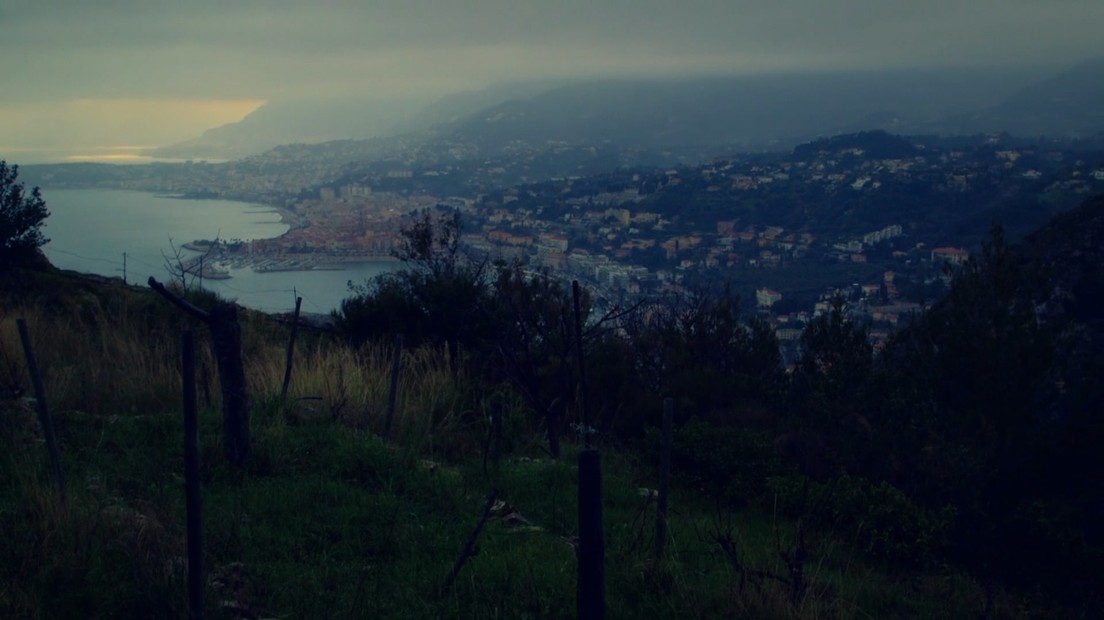 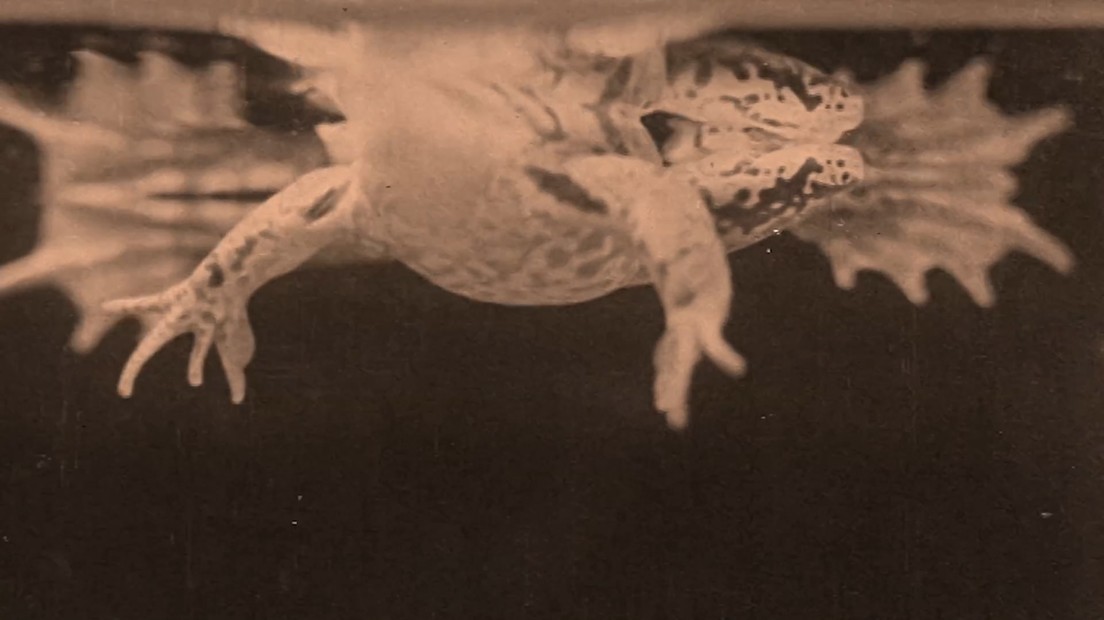 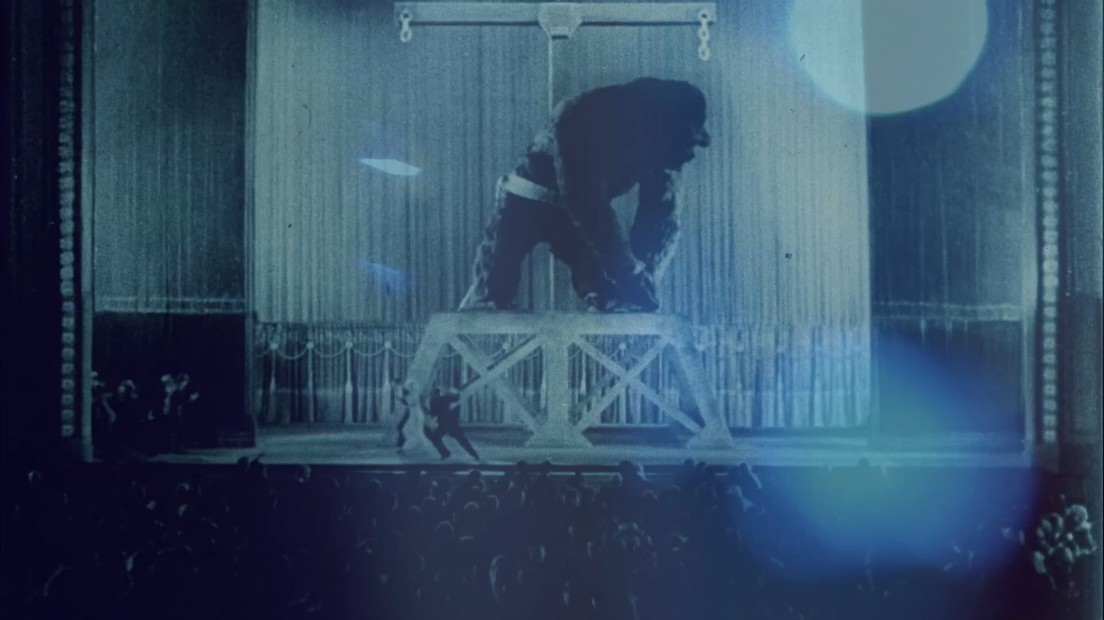 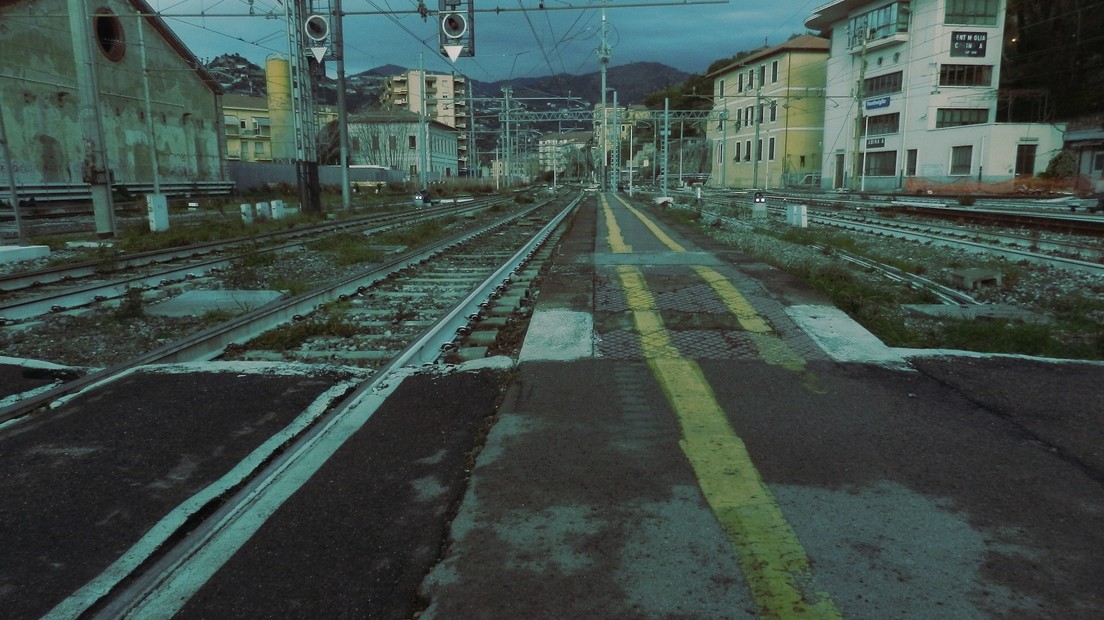 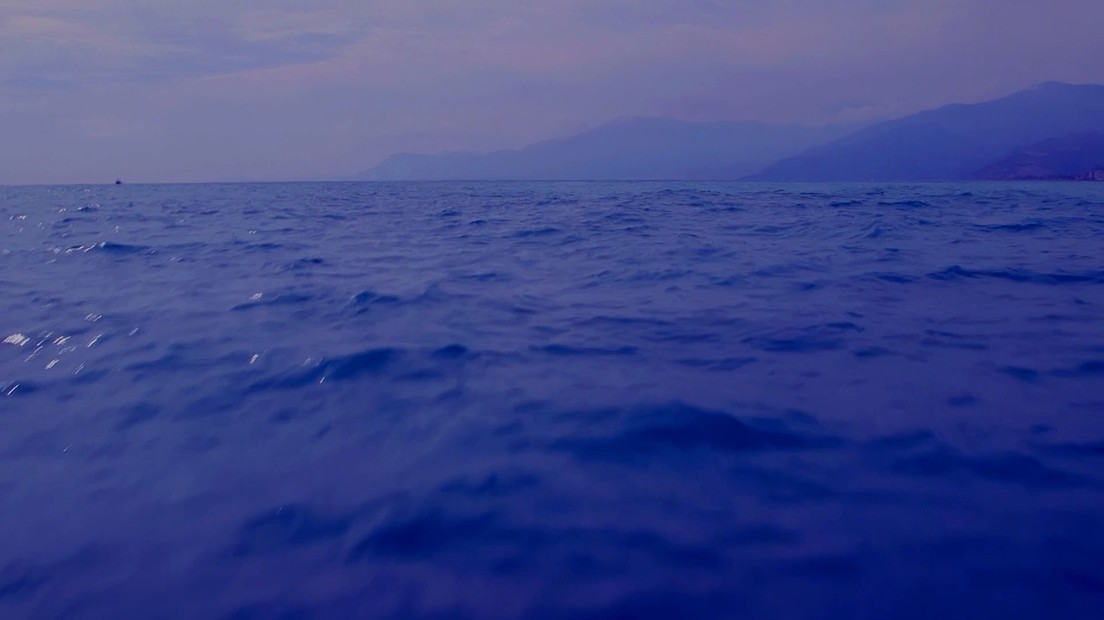 A tale of the present,

As if it were seen from faraway.

A tale from the planet of the humans.

Starts immersed in the silence of the Ventimiglia border between Italy and France - a border no longer in the news. It's where thousands of migrants had been blocked, but worst of all, it's where silence reigns supreme, where nothing ever happened, nothing is happening and nothing ever will.

The film starts as a reconnaissance and then waxes into a fantastic tale, told by a chorus of frogs.

In this tale, a scientist experiments a human rejuvenation cure using monkey testicles. A Doctor Voronoff actually and factually DID exist. Back in the “roaring twenties” his fame had been planetary. Songs were composed about him, and sung at the Folies Bergères of Paris and the Sambas of Rio de Janeiro's Carnival. Mikhail Bulgakov wrote "Heart of a Dog" inspired by him. And Mussolini declared that he wanted to "Voronoff" all of Italy…

And then the good Doctor fell into oblivion. As if he had never existed. As if he were a character of an ancient movie, a Doctor Moreau on the Island of Lost Souls. His villa still stands tall above the border. And the monkey cages are still there. Everything is silent. In this silence, migrants don't exist – no, they cannot exist in the permanent vacation of this splendid Riviera caressed by the Mediterranean Sea.

Everything is like in a tale. Nothing ever happened, nothing is happening, nothing ever will.

A tale always starts with "once upon a time."

"Once upon a time" is always some other time, never the present we are living in.

This is why this film is a tale of the present. A tale told by a chorus of frogs – frogs are everywhere, and always somehow hidden. Their chorus is immortal. And night after night in my explorations, I listen to them….

I only wanted to scout some places along the border. To see and "be there." Call it an on-the-spot survey. We always go to places where things have happened. But this time it's as if nothing had ever happened at all. Or maybe we might have even been in those places during the action, but it had all happened under a thick layer of silence. And so nothing had happened at all.

Every day and every night, the migrants try to get across. And they're regularly stopped, refused, locked up, beaten, kicked out - and they try again and again. But not to fear: they don't exist. We're in the marvelous "permanent vacation resort" of the Riviera. We're immersed in the silence of the border, as if nothing were happening, as if what is going on we're shorn of its "here-and-now" real-time and occupying some other space. Once upon a time - that's how fairytales always begin.

Once upon a time, in this fairytale Riviera, there lived a scientist who explored the deeper causes of death, trying to discern if life itself had considered death in its calculations. Armed with his conclusions, he invented a rejuvenation cure based on the transplantation of monkey testicles into man. This new and groundbreaking treatment made him famous across the entire planet.

And then oblivion. When talking to me about Serge Voronoff, they showed me his old villa looming large over the border, with the now tumbledown cage that he had used to breed and raise the monkeys. And I couldn't help thinking of some fantasy film characters of that period. A Doctor Moreau, or the scientist from the "Invention di Morel," the novel by Adolfo Bioy Casares, who had invented eternal specters.

And so I said to myself, if I have to tell the story of this border's silence, I'll tell it like a fantasy film, set in another epoch, a present-day fairytale.

The story of Voronoff is woven into the history of those years. As a Russian Jew, he had encountered the pogroms. As a refugee, he had reached Paris at the height of the anti-Semitic Affaire Dreyfus. Becoming rich and famous, he hobnobbed with the top celebrities of his day, as well as with French colonial administrators, and Fascist bigwigs. But his fame hadn’t shielded him from the Race Laws of 1938, and he had been forced into a hasty escape from deportation.

The silence of the border, oblivion, the very negation of the present... death, life. To be alive... full of life… what life?

And then there are the frogs that sing. Frogs that are as invisible as they are everywhere. Animals of passage between life and death, water and earth. The frogs sing inside their water cisterns, polyphonic choruses dedicated to the world's fairytale. They were, back in the day and they always will be the mocking witnesses of History. I had recorded their songs rising from those water cisterns dotting the Riviera, and they were the ones who had given me permission to tell this story. And they're still always there, alive and well, as if death were of no concern to them, as if they had trascended it.

I wanted to assemble the film like the scouting of a scene in some fantasy movie, as if this seaside border, these mountain pathways, were on an island that had been abandoned by its inhabitants. There are traces and patterns to decipher, something happened. In this scene there are some water cisterns, like so many metaphysical presences, and it's from the hollows of the cisterns that the frogs tell the story.

The scouting comes in the form of POV sequences in which I look for traces of the enigma, patterns of what is left of the story, of what I can imagine. I try to imagine, to go beyond the silence - as if stealing peeks from another age, looking at the present as if in anticipation.

The film becomes a polyphony of time and space that emerges from the inspection. A work with a mingling of archive images, films, topical news, "distant" current affairs, photographs, that evoke the present as if seen from another epoch. This means visually working on the stratification of imagers and on their very materiality, on the graininess of the Super-8 holiday films that melds with and becomes the graininess of the present-day images, along with overlapping and saturation - until the images become a vivid materiality of time. And from its materiality it speaks of memory and oblivion and tries to breathe life into the specters.

A film of specters and a polyphony of voices, times and spaces (the sea, the silence of the border...), a polyphony with a chorus of frogs and the voice of a narrator. The narration isn't the text upon which the film was created, it comes directly from the notes written during the editing of the film, like the notes of a travelogue in an imaginary dialogue with frogs. And the notes themselves practically became the lyrics to a song. 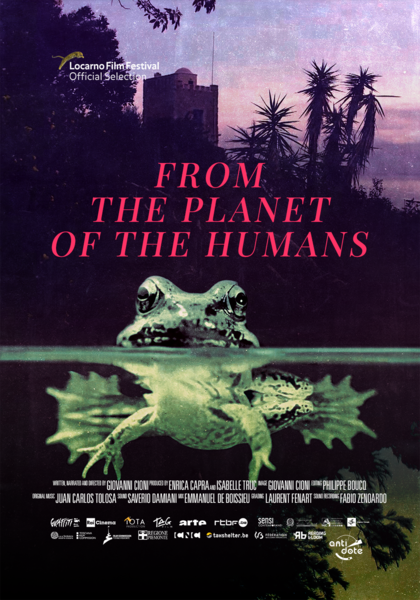